The Aberdeenshire Town of Banchory could soon be using low carbon geothermal heat. Just north of the town stands the Hill of Fare, a huge mass of granite extending several kilometres down into the earth. Could the huge amounts of heat deep below it be harnessed to drive the town’s Heat network, providing low carbon – and low cost – heat for homes and businesses?

Cluff Geothermal has played a leading role in a feasibility study exploring that possibility. As part of a consortium featuring a range of academic and business partners, in early 2015 Cluff Geothermal successfully bid to the Scottish Government’s Geothermal Energy Challenge Fund (part of the Low Carbon Infrastructure Transition Fund) for a grant to fund the study. Work was carried out in the second half of 2015, and included a survey of the granite on the Hill of Fare itself, the construction of financial models, and an innovative analysis of the carbon intensity of the proposed heat system.

The consortium’s final report was submitted to the Scottish Government on time and under budget in February 2016, and published on 23 March. The geological analysis and editing of the final report was led by Professor Paul Younger, Rankine Chair of Engineering at the University of Glasgow and Cluff Geothermal’s non-executive technical director. The carbon intensity calculations were done by Cluff’s Dr Michael Feliks who also co-authored the financial analysis.

The report’s conclusion was positive, recommending that exploratory boreholes should be drilled to learn more about the geothermal potential of the Hill of Fare, and suggesting how geothermal heat could be used in future by the Banchory heat network. As well as securing low carbon heat for the town for years to come, a geothermal heat system at Banchory would demonstrate the viability of the technology which could potentially be rolled out across large areas of north eastern Scotland. 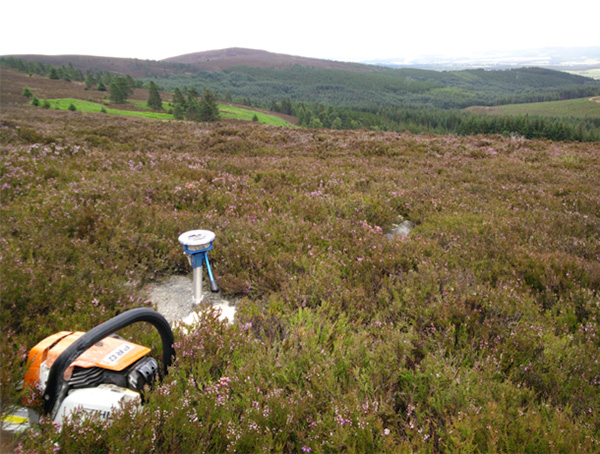 Collecting data high on the Hill of Fare, Aberdeenshire

George Percy, Managing Director of Cluff Geothermal, said “This report highlights the great potential of geothermal heat to offer a green energy future for many areas of the UK. I am delighted that Cluff have played a major part in delivering it, and we hope to see the report’s conclusions being taken forward”.

Prof Paul Younger, Cluff Geothermal’s non-executive technical director, said: “Exploiting the geothermal resources in Grampian granites could offer Scottish homes and businesses a low carbon, sustainable source of heat. This feasibility study has given us a glimpse of the potential for geothermal heat to play a key role in decarbonising Scotland’s heat supply.”